When I Reminisce Over You 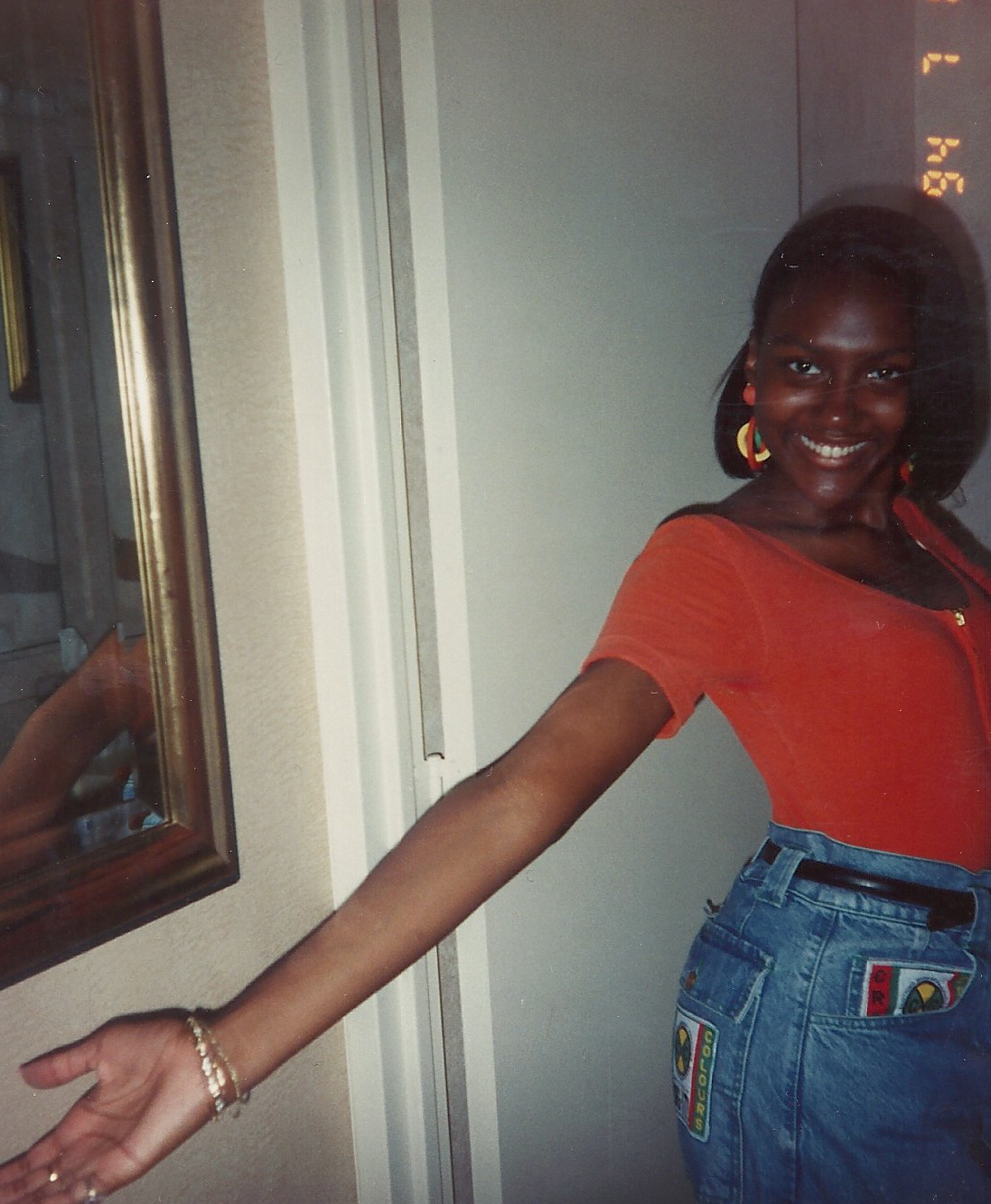 I look at you today with eyes that have seen so much more than you. That’s not to say that you haven’t seen your fair share of life. But these eyes of mine have seen more than the visions of sugar plums that are currently dancing around in your head. These eyes of mine have seen you achieve your highest highs and your lowest lows. And I have to say to you, based on the road traveled, this 38 year-old woman owes you a sincere apology.

And just where did this hatred begin? I don’t think there is one exact moment that serves as the definitive one. No. Instead, I think it was a gradual process. An unfortunate seed that was planted, fertilized and watered over the course of one year. The seed germinated until it infected every area of your life. Let’s see, at the age of 16, you lost your virginity. You didn’t really want to. But you didn’t know how to say that. You wanted to be liked, and so you acquiesced. Your religious foundation left you feeling damaged and unworthy after engaging in such a sinful act. You felt guilty beyond repair. It didn’t help that you would vacillate from saying you would never have sex again to dismissing that declaration without much thought. And then it happened. The one thing you never thought would happen to you. You became pregnant. Prior to your pregnancy, you looked your nose down at the young pregnant girls you saw walking around. And then you became one of them. This discovery left you devastated. After all, this wasn’t supposed to happen to you. This was the sort of thing that happened to “fast” girls, but it wasn’t supposed to happen to you because you were supposed to be a “good” girl–a “smart” girl. You should have known better. And there was no way you could have ever told your father. No way! So that left you with only one choice. Abortion. Yep, you had an abortion. This one choice sent you further into the abyss of despair, guilt and shame. This choice followed you and the shame permeated your every choice after that. You didn’t believe you deserved anything good. You told yourself you deserved to be punished. And you unconsciously set out to make sure that you were.

No. Wrong, My Dear.   And I’m sorry I didn’t know any of this back then. I blamed you for so much. I bullied you. I treated you so badly. So these eyes of mine tear a little when they look at you now, because these eyes have seen so much and they see so much more clearly than your young ones. These eyes of mine see so much beauty and strength and grace. My goodness, young woman, you are powerful beyond measure! You carried all of that on your shoulders–alone–and still managed to graduate a year early from high school with honors, go on to college and grad school, get married, raise a baby, and have love in your heart for others! You never allowed the light within to truly dim. You need to know that all of that is a sign of strength.

So yes, I have to say sorry. I used to look at you and hate what I saw. I used to think you were pathetic and weak and could have been so much more. I’m so sorry because I now know I couldn’t have been more wrong. Looking at you now leaves me with so much gratitude. It’s because of you that I stand here today. Your strength brought me this far.  So yes, thank you, 16 year-old Je’Niece! If I could, I’d give you the biggest, warmest, heartiest hug you have ever had. But since I can’t, allow me to say something I wish I’d said a long time ago. I love you.

Well it’s day 5 and today’s gratitude is a bit deep.  It has to do with a secret that I carried around for much of my life.  I actually never even told my father before he passed away.  Yet today, I don’t feel the heaviness of it as I did in years passed. In m opinion, humble as it may be, that is a true mark of my growth.  And yet another reason to be thankful.

On this day I am grateful for my unborn child. I’ve not shared this with many, but almost 20 years ago, when I was 16, I got pregnant. I felt ashamed, embarrassed, and disappointed. But most of all, I was just plain old scared. I was scared of what my father was going to do to me when he found out. He would have killed me—or come very close to it. And who could blame him? After all, I deserved to be punished. I was supposed to be a good girl and if I was pregnant, that meant I was having sex, and good girls simply did not do that. It also didn’t help that I’d begun having sex simply because my boyfriend wanted to. I wasn’t even remotely curious about sex. I just really wanted to be loved so when he showed me in a most non-discreet and obvious way where we were headed, I fell silent and complicit. I thought to myself, “Oh wow, I guess I’m going to have sex now.” And I did. I felt ashamed, but that was when and how he showed me attention and I desperately wanted his attention, so I continued to engage. I acted like I liked it. I acted as if I wanted it, but I didn’t and I died a little inside each time I succumbed to his will. I was in agony. Winding up a sobbing hot mess on the bathroom floor after reading the positive result on a pregnancy test only pushed me further into the abyss. I decided that I wouldn’t tell my parents. I’d get an abortion and never think about it again. But for the next 10 years, all I could think about was that baby and the horrible thing I’d done. The abortion only fueled the war I’d unconsciously waged against my already fragile self-esteem. I was in misery every single day.

A few days after the procedure, my mom found my medication. She’s a nurse so she knew exactly what the pills were. Too ashamed and afraid to tell her, I lied. I said they belonged to my best friend. She believed me—or at least she really wanted to. I felt so bad that I confessed to my friend. Being the wonderful friend she was/is, all she said was “Well, your parents already think I’m fast so a little less respect from them won’t hurt me.” Now it would seem that I’d been given a pass so that meant that I should’ve been ok from that point forward. But I wasn’t. I actually felt worse. In my mind, not only was I a fornicator and a murderer, but I was also a liar with no morals and a horrible friend. I deserved a fate worse than death. I deserved to be brutally punished over and over until I wished for death. And because I was so low, I didn’t even deserve to be relieved of my agony through death. For over a decade I rooted myself in this torment. I would be 27 years old, finding myself pregnant for the second time when I recognized that everything I was feeling was nothing but guilt and I had been wallowing in it. Before I gave birth to Jasmine, I thought about my unborn child every day. What would she/he look like? What would I have named him/her? What kind of mother would I have been? I didn’t believe I’d ever get the chance to become a mother. After all, I didn’t deserve it. When I found myself pregnant with Jasmine, I was happy but afraid. I was afraid every day of my pregnancy. I thought something would go wrong. I thought I deserved for something to go wrong. How dare I enjoy the beauty of motherhood after what I’d done to my first child? Once Jasmine was born, a peace wavered over me that said, “Enough. You must take care of this little girl who is here. It’s ok. You’ve punished yourself enough. Now stop this foolishness. It’s time to enjoy.”

I’ve heard it said that the soul of an unborn child simply waits until the next time to be born to their mother. So I don’t know if Jasmine was the soul waiting to be born through my unborn child at that time, or if my unborn child was another soul who has gone on to glory. But I do know, that I love that unborn child with all my might and I appreciate my unborn child. Through that brief encounter, that beautiful little soul has touched my life in a most amazing way. That soul taught me that guilt is a monster that serves no one. Guilt is a beast that robs of all joy. I wasn’t even able to get the lesson intended for me because I was stuck in my shame spiral. Through my unborn child I learned that guilt and sorrow are not the same. Sorrow says, “I messed up. I won’t do that again.” But guilt doesn’t. Guilt isn’t necessarily sorry for the act.  It simply feels bad about it because it knows the act goes against your moral compass.  Sorrow seeks to make amends.  Guilt just wants to feel better.  Guilt will continue to repeat the same thing and cry afterward having the nerve to say “Oh I feel so bad.” Yes I was sorry for my mis-steps, and I never did repeat the same mistake. However, the guilt is what allowed, even compelled me, to remain in the horrible cycle of punishing myself time and again. The guilt prohibited me from receiving and enjoying good. That unborn child also taught me compassion. Before I found myself pregnant, I judged young, unwed mothers. I looked down upon them. They were something to point at while I puffed up my chest and told myself how much better than they I was. The sweet irony of ending up just like them forced me to bake and eat my very own humble pie. While it wasn’t as sweet as I would have liked, it was very necessary and it was sustenance for my soul. I learned that we are all on our own journey and no one person is better than any other. We may cling to petty and superficial ties to make ourselves feel superior, but underneath all that bravado lays insecurity. But our insecurity is no excuse for having the audacity to think we can judge another. I’m still not convinced that I didn’t make the best decision for me at the time, but what I am convinced of is that it was all par for my course and I’m thankful for it. If my unborn child can hear me, I simply want to say that even though I didn’t birth you, I love you with all my heart and know that Mommy finally got the lesson. Thank you.